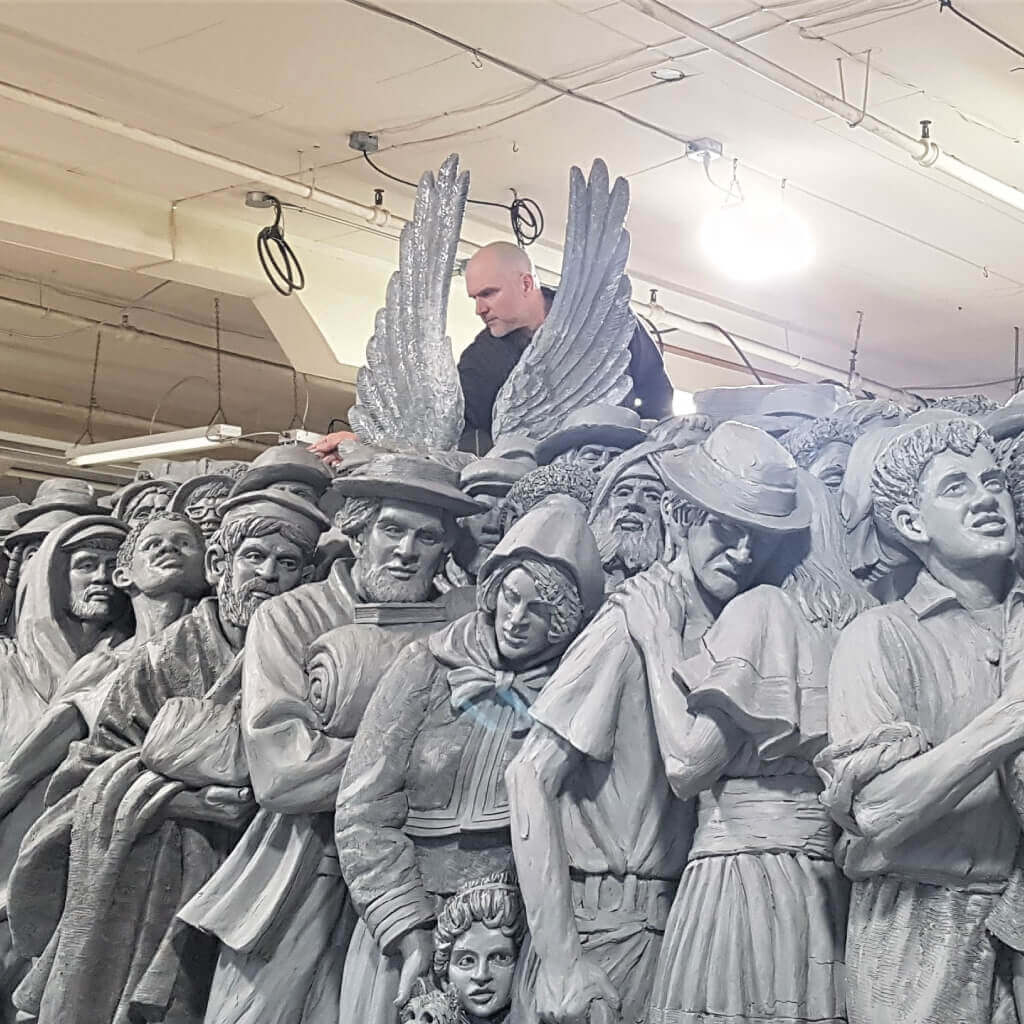 Today, September 29th, the Church marks the 105th edition of the World Day of Migrants & Refugees (WDMR) in St Peter’s Square, where the Pope has celebrated a special Mass for all the vulnerable people on the move. Afterwards, an impressive life size sculpture depicting migrants and refugees —called Angels Unawares— was unveiled.

Today, 29th September, the Church marks the 105th edition of the World Day of Migrants & Refugees (WDMR) in St Peter’s Square, where the Pope has celebrated a special Mass for all the vulnerable people on the move. Afterwards, an impressive life size sculpture depicting migrants and refugees —called Angels Unawares— was unveiled.

In 2013, when Pope Francis made a trip to Lampedusa and Lesbos, he was deeply moved by the tragic situation of migrants and refugees there. The experience sparked the creation of the Migrants & Refugees Section (M&R), a small action-oriented Vatican office personally directed by the Holy Father to ensure that those forced to flee are not shut out or left behind.

Since its creation, the M&R Section has been helping the Church worldwide to support those who are forcibly displaced by conflict, natural disaster, persecution or extreme poverty; and those who fall victim to human trafficking. In March 2019, a new campaign began within the Section to prepare for the World Day of Migrants & Refugees (WDMR), which has been celebrated today. Pope Francis himself chose this campaign’s theme, “It is not just about migrants”, to show up our blind-spots and make sure no one remains excluded from society, whether a long-time resident or someone newly-arrived. On May 27th, 2019, he said:

“[…] migrants, refugees, displaced persons and victims of trafficking have become emblems of exclusion. In addition to the hardships that their condition entails, they are often looked down upon and considered the source of all society’s ills. That attitude is an alarm bell warning of the moral decline we will face if we continue to give ground to the throw-away culture. In fact, if it continues, anyone who does not fall within the accepted norms of physical, mental and social well-being is at risk of marginalization and exclusion. […]”

For the WDMR —which takes place every year on the last Sunday of September— the Holy Father presided at a solemn Eucharistic Celebration in St Peter’s Square at 10.30 a.m. before thousands of visitors.

Afterwards, Pope Francis unveiled an impressive life size silicon bronze sculpture called “Angels Unawares” —by Canadian artist Timothy P. Schmalz— that depicts a group of migrants and refugees from different cultural and racial backgrounds and from diverse historic periods of time. Angel wings can be seen emerging from the midst of this diverse crowd of people, suggesting the presence of the sacred. The inspiration behind the work is taken from a biblical passage:

“Do not neglect to show hospitality to strangers, for thereby some have entertained angels unawares.” (Hebrews 13:2)

The sculpture “Angels Unawares” is installed in St Peter’s Square. It was generously supported by the Rudolph P. Bratty Family Foundation, led by Rudolph Peter Bratty and his wife Carolina. This Canadian family’s support of the sculpture serves as a testament to their vision and commitment and to the very spirit of hope that embodies all new beginnings. Artist Timothy P. Schmalz has also stated that the work has been donated to the Pope and the Vatican.

The Church has been celebrating the World Day of Migrants & Refugees since 1914. It is always an occasion to express concern for many different vulnerable people on the move; to pray for them and the challenges they face, and to increase awareness about the opportunities that migration offers.

For over 25 years, Canadian Timothy P. Schmalz has been working on large scale sculptures. He is a figurative artist with many of his pieces installed worldwide. Some of his most highly regarded pieces are installed in historical churches in Rome —the best known being the “Homeless Jesus”, which currently rests next to the papal charitable office in the Vatican. Timothy describes his artistic effort as “visual translations of the Bible.” Although most of his work is based upon spiritual themes, he also creates other large, complex public sculptures in bronze. These include monuments that honour veterans and firefighters. He strives to create monumental artwork that connects with viewers through design and details that not only touch the viewer on an emotional level, but also allow them to feel somewhat a ‘part’ of the piece.

Four migrants helped the Pope to unveil the sculpture. This is the story of two of them:

Henrica has just turned 25. She is from the Democratic Republic of Congo and came to Italy two years ago. “I’m happy about how I was welcomed in Italy. They’ve given me the strength to move forward.” Henrica is a nurse and is preparing to have her degree validated so she can serve in Italy where there is an urgent need for more nurses.

Gift, a Nigerian, could not help but smile from ear to ear when he saw that the sculpture includes a young African with a haircut just like his. “I love my job as a waiter because it gives me the opportunity to communicate with other people and help them to have a good time,” he said enthusiastically. But that’s not all; Gift is also an entrepreneur and a singer. At just 19 years of age and after only two years in Italy, he has already created his own hip hop record label, “The Next Big Team”, with the goal of promoting culture.

About the Migrants and Refugees Section

The Migrants & Refugees Section is a small pastoral office of the Holy See, personally directed by Pope Francis, working to help the Church worldwide to accompany vulnerable people on the move, including those who are forcibly displaced by conflict, natural disaster, persecution or extreme poverty, refugees and victims of human trafficking. More information at: https://migrants-refugees.va/